The sight of an aeroplane fills every child with wonder and longing. "I'm going to be a pilot!" is a familiar refrain. And over the years, many children have indeed become pilots and airmen. They are remembered by crumpled photographs, much-read letters, and a few stained documents, monuments and gravestones. We have been free to commemorate them for less than a quarter of a century. In the two short decades since airfields in Hungary were opened for everybody, pilots have lost their status as aerial superheroes, but somehow remain symbols of the much longed-for blue yonder. Hungary has been living in peace for more than sixty years, guarded by supersonic aircraft flown by them. We often see them helping the victims of natural disasters, lending support to sober-minded countries trying to create peace among violent passions, and bringing humanitarian aid to people in need. We are proud when their professionalism elicits the admiration of top aviation experts and comrades. Hungarian airmen are known all around the world. This is a book of thanks. It pays our respects to Hungarian airmen past and present. It is the work of three authors, none of them combat pilots, but all at one time children staring up at the blue sky with longing. They look at airmen in the same way as most readers, and for this very reason they notice things that perhaps the airmen themselves would not. They see, besides the aircraft, the people who fly them. The story of a country in the story of its airmen. And a nation's frequently-battered wings of desire in the outstretched eagle's wings of its pilots. 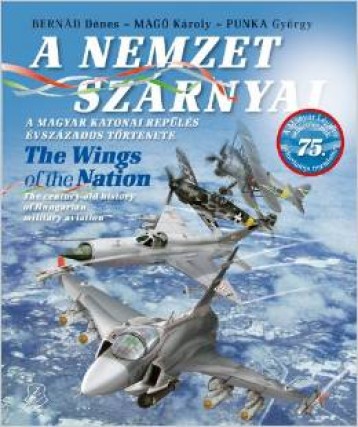